Puppies got a big meaty bone today, as they turned 4 weeks old. As you can see, they have no trouble with it. They are still nursing from Barynya but are learning to eat now that their teeth have emerged. This is a lower leg from a gemsbok :-)
Posted by Unknown at 06:07 1 comment:

Male Caucasian Ovcharka puppy born September 2011, imported from Hungary. Owners no longer have a property large enough for him and he needs a new home. Has FCI pedigree and good looks, is for sale price negotiable. Has a good pedigree, Hungarian Champion and Best of Breed titles in three generations on the sire's side, and in great-grandparents on the dams side. Please contact me if you are interested and I will connect you with the owners. Volko is not neutered, and currently lives in Johannesburg area. 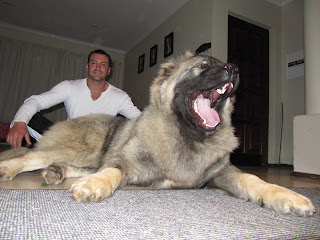 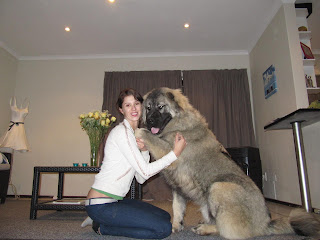 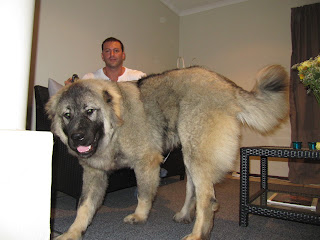 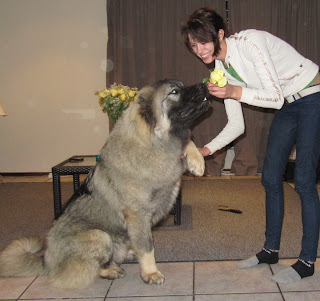 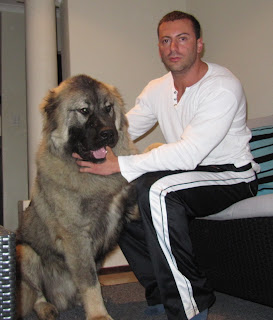 When it Rains, It Pours

As most dog breeders will tell you, when it rains....it pours. The last couple weeks have been a trial for the girls and we were hit with many of the problems you can count on having if you do breed dogs - they just don't usually happen all at once.

Barynya went in to the vet Friday the 3rd for an emergency spay. We had counted 7 puppies on the ultrasound, and 9 were born - two still born that never revived. Barynya seemed to relax and settle. No placenta had come out with the last pup, but she was exhausted and refusing to get up from her box and leave the puppies, so I didn't force the issue. I monitored her temperature and watched for any signs of infection that might indicate a retained placenta, and was constantly calling the vet. Friday morning I caught her straining and looking at her hind end, and she acted strange and began to pace around, so we bundled her and the pups into the truck and raced to the vet. She knew something was wrong as she walked outside and waited for Phillip to come with the bakkie, then climbed in herself - leaving me to bring her puppies in a box. At the vet we did an xray and saw no skeletons, he said no puppies left maybe just a retained placenta. He gave a shot of oxcytocin to induce contractions, and when he had a feel around to his surprise there was a puppy in the birth canal. With his help she managed to push that one out on her own. We took another xray to check, and he came back and said he could still faintly see something. We did an ultrasound then, and he saw one more mass that looked like a puppy. So we decided to do an emergency spay. I stayed in the surgery and helped with the spay, we got the uterine horns tied off and the uterus out (with one pup inside it still) when to his shock he felt a third puppy that had not shown on the films already in the birth canal. With difficulty he managed to get it out, it was enormous - easily 700 grams and very long. My mistake for being lulled into a sense of security by a low puppy count on the ultrasound we did mid pregnancy, and thinking she was done. Sad that she lost some pups, but in retrospect if that last puppy had actually moved forward much more Barynya may have been in a lot of trouble, not being able to push him out. 12 is an extraordinarily large litter and these puppies were all bigger on average than her usual pups. The vet remarked that she was in excellent condition and that might account for the unusually large number of pups and their size. Fortunately she did well with the spay and was herself again a couple days later. Dr. Rust is a great surgeon. Mama and puppies are all doing well, including "special needs" - the runt of the litter who is holding her own although very small at this point.

Then, on Monday Tsitsilia was whining and looking unwell. Took her in as well, and she has a tennis ball sized lump in her abdomen and pyometra, an infection of the uterus. Pyometra is not uncommon in intact bitches and can be very dangerous, particularly closed pyometras where the cervix remains closed and the uterus cannot drain. In that case the dog shows no external symptoms. Fortunately, Tsitsilia has an open pyometra which is less dangerous. We think the tennis ball sized lump could be 1) scarring from the C-section she had on her first litter or 2) a partially re-absorbed puppy that could have been missed on the ultrasound when she appeared not to be pregnant on her last mating. She's on antibiotics now and had a shot of anti-inflammatory, and we will see if it resolves. There is only a 40% chance it will clear, and that it will be safe to breed her again for her final litter, but Dr. Rust will re check her tomorrow. If there is not significant improvement, we will spay Tsitsilia - often the only solution for pyometra.
Posted by Unknown at 11:58 No comments:

Barynya went into labor Tuesday night and the first puppy was born at 9:15 PM. The next did not make an appearance for more than 4 hours, and was a very big puppy. Enzo stood guard at the glass sliding doors and looked on. By 5 am she had 5 beautiful puppies . He followed her around the yard when she went out for a potty break and then ate half a chicken before getting back to the business of whelping.  Sadly puppy #6 was stillborn. Despite efforts to resuscitate her, she never took a breath. I put her back in the whelping box with her brothers and sisters and let Barynya clean her a few more minutes, then quietly covered her with a washcloth while mother was busy cleaning her other puppies. Barynya did not notice when I took her away. We slept on the couch near her box then, as her contractions had stopped. At 10 in the morning Phillip counted 5 comfortable nursing puppies. I went to see them and counted 6! She always manages to have one when nobody is looking :-)  Then as Phillip was petting her at just past noon, she stood up and produced a 7th puppy. We held our breath as she tore the sac and severed the umbilical cord and then the puppy gasped and squirmed. Three minutes later he was nursing strongly. Mom and puppies are all healthy and happy. 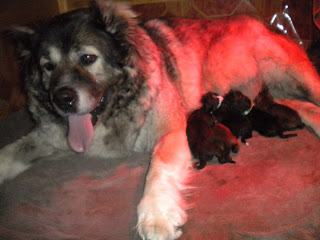 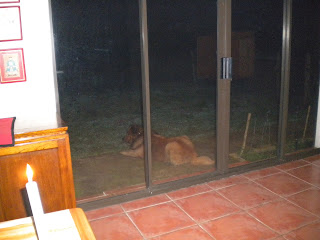 Dr. Rust will be coming to the farm today to check on the girls. We will do a sonogram on Barynya and Tsitsilia and a general wellness check. Tsitsilia is not as big as we would expect in week 5, after two verified ties (and maybe some that we did not witness) on her mating. It would be surprising if she were not pregnant but she may be carrying only two or three pups, or a single pup. In the latter case she needs to be monitored carefully because with a singleton pup there may not be enough hormones to induce labor. We will let you know what Dr. Rust sees!
Posted by Unknown at 01:39 2 comments:

We brought this little one in to warm up, and had her in a box with a warm water bottle for a while till she revived. 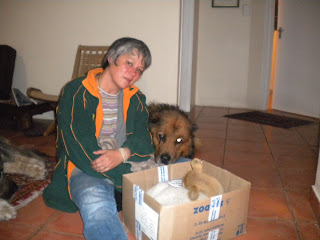 Enzo is worried because the baby is not well - but eventually she warms up and recovers.... 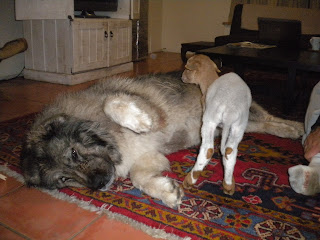 Where are the teats? 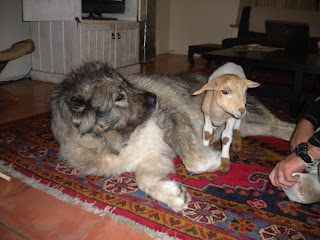 Wait, this is not my mother.
Posted by Unknown at 11:51 No comments:

Promote Your Page Too